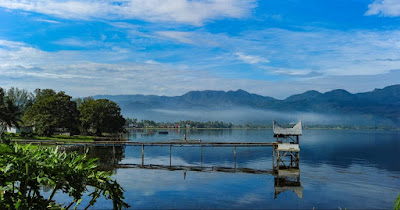 A sea of ​​clear water, fishing boats scattered on the surface of a lake for fishing, plus a green landscape around the lake. Yes, this kind of scenery you will encounter on Lake Singkarak, West Sumatra. This lake is about 70 km from Padang, capital of West Sumatra.

Lake Singkarak stretching and administratively included in two districts in West Sumatra, namely Solok and Tanah Datar. With an area of ​​approximately 1,000 acres, the lake has become the second largest in the highlands of Sumatra after Lake Toba. Lake with a depth of 268 meters and is located at an altitude of 363.5 meters above sea level, including the type of tectonic lakes as expected due to a shift in the Earth's plates are formed.

Although relatively spacious, but not many species of fish that live in the waters of Lake Singkarak. There are only 19 recorded species of fish that live in this lake. This is possible because of the limited amount of plankton that become fish food in general. Plankton is difficult to live here because of the depth of the lake that makes the sunlight can not penetrate the bottom of the lake.

Because of its beauty, Lake Singkarak become one of the tourist attractions are crowded with people around and also from outside the city. The beauty of these places was first known in 1905 through biology journals belonging to Ernst Haeckel, a researcher from Germany. Not only examine Singkarak lake and surrounding ecosystems, Haeckel was also amazed by the beauty of this lake, making it encapsulates the beauty of Lake Singkarak in a painting.

There are many activities you can do to enjoy the lake Singkarak. You can swim in the clear lake water, the boat ride around the lake, fishing on the lake shore or join the fishermen catch fish. Do not forget to bring your camera to capture the beauty of this tourist spot. Large lake with a green background Bukit Barisan opposite a pity to miss.

In addition to these activities, you can also do a culinary tour in the stalls that exist around this tourist spot. If you eat at the stalls unsatisfactory, try fishing or fishing and burn it on the edge of the lake with friends. This could be a pleasant experience.

As the lake once the pride of West Sumatra natural attractions mainstay, singkarak Lake has some unique things interesting for you to know, including: 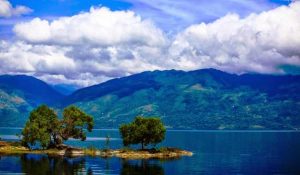 Tour de Singkarak first held in 2009. Furthermore, when implementation takes place during the week between the months of April to June with seven stages that must be passed by the participants. Tour de Singkarak not just a cycling race on the highway, but also the introduction of cultural and natural beauty of West Sumatra. Along the route to be taken, participants will be treated to views of Minang cultural diversity and natural beauty of West Sumatra.

Because belonging to the category of tectonic lakes, lake size Singkarak still subject to change following the earth's shifting plates. According to research experts, the length of the lake at first only 3 km, then increased to 8 km, 13 km and is now about 23 km. The length of the lake is expected to continue to grow.

Recorded about 19 species of fish that live in the waters of Lake Singkarak today. One of the fish species are fish bilih (Mystacoleucus padangensis). Fish bilih be special because it can only live in this lake alone. Many have tried to breed this fish out of Lake Singkarak, but always failed because bilih fish always die.

Bilih fish normally small in size, the maximum length of only about 10 cm with sparkling silver colored scales. Of the 19 existing species of fish, the fish is what the numbers are expected bilih most in the waters of the lake. Fish bilih become an economic resource of local people. Fishermen catch and sell them to stalls. This fish is most delicious when fried and dipped in sauce.