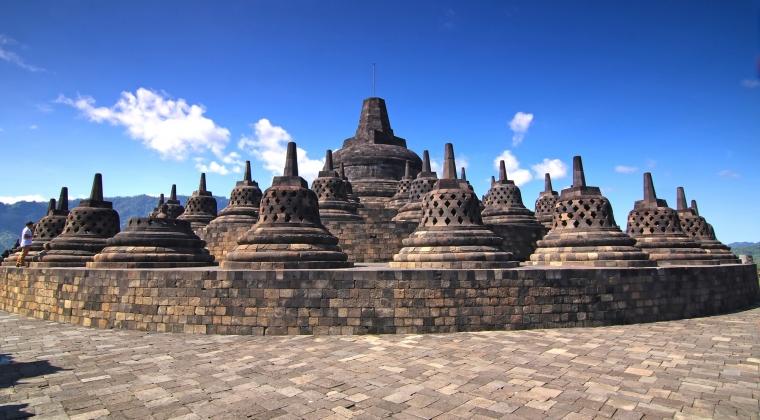 For those of you who like history, don't forget to stop by one of the tourist attractions located in the Magelang region, Central Java. Yes, the place is the Borobudur Temple which is one of the historic sites as well as being the largest temple in Indonesia. Even these Buddhist relics have been included in the seven wonders of the world.

Tourist attractions in Magelang are always crowded by local and foreign tourists. How not, because this one temple is the largest Buddhist temple in the world. In addition, this place is still often used to worship Buddhists throughout the world.

Borobudur word itself is based on the first written evidence written by Sir Thomas Stamford Raffles, Governor General of Great Britain in Java, which gave the name of this temple. There is no written evidence that older who gave the name of this temple Borobudur. The only documents that indicate the existence oldest temple is Nagarakretagama book, written by the MPU Prapanca in 1365. In the book written that the temple was used as a place of Buddhist meditation.

In 1814 when the British occupied Indonesia, Sir Thomas Stamford Raffles heard of the discovery of giant archaeological object in the village of Magelang Bumisegoro. Due to the great interest the history of Java, then immediately ordered Raffles HC Cornelius, a Dutch engineer, to investigate the discovery of the location was a hill covered with shrubs.

Cornelius assisted by about 200 men cut down trees and remove shrubs that covered the giant building. Because the building is already fragile and could collapse, then report to the Raffles Cornelius invention includes several images. Because of that discovery, Raffles was honored as the person who started the restoration of Borobudur and received worldwide attention. In 1835, the entire area of ​​the temple has been excavated. This temple continues restored the Dutch colonial period.

After Indonesia's independence, in 1956, the Indonesian government requested the assistance of UNESCO to examine the damage to Borobudur. Then in 1963, out of the official Indonesian government's decision to conduct the restoration of Borobudur temple with the help of UNESCO. But this restoration was only really started on August 10, 1973. The process of restoration was completed in 1984. Since 1991, Borobudur designated as World Heritage Site by UNESCO or World Heritage. 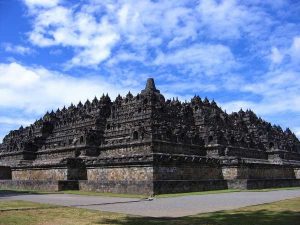 Borobudur is located in Magelang, Central Java, about 40 km from Yogyakarta. Borobudur has 10 levels consisting of six levels of a square, circular level 3 circular and a main stupa as a peak. At every level there are several stupas. Altogether there are 72 stupas in addition to the main stupa. In every stupa there are statues of Buddha. Ten levels of Buddhist philosophy which describes ten Bodhisattva levels which must pass to reach the perfection of the Buddha in nirvana. This perfection symbolized by the main stupa at the top level. Borobudur structure when viewed from above form a mandala depicting the structure of Buddhist cosmology and human thinking.

The four sides of the temple there is a gate and stairs to the level above it like a pyramid. This illustrates the Buddhist philosophy that all life came from rocks. Later stone into sand, then into plants and then into an insect, then into wild animals and pets, and the last to be human. This process is known as reincarnation. The last process is the soul and finally go into nirvana. Each stage of enlightenment in this life process is based on the philosophy of Buddha depicted in the reliefs and sculptures in the entire Borobudur.

This huge building just a giant pile of stone blocks which have a total height of 42 meters. Each stone connected without the use of cement or adhesive. These stones are only connected by patterns and stacked. The base of Borobudur temple is about 118 m on each side. The stones used approximately 55,000 cubic meters. All the stone is taken from the river around Borobudur. These stones are cut and then transported and connected with a pattern like the lego games. All without using glue or cement.

While relief began to be made after the completion of rocks stacked and connected. Reliefs found on the walls of the temple. 2670 Borobudur has different relief. Relief is read clockwise. This relief illustrates a story that I read it starts and ends at the gate to the east. This shows that the main gate Borobudur temple facing the east like most other Buddhist temples.

Every year on the full moon in May (or June in leap years), Buddhists in Indonesia commemorating Vesak at Borobudur. Vesak is celebrated as the day of birth, death and the time when Siddhartha Gautama obtain the highest wisdom to become the Buddha Shakyamuni. The third event is called Vesak Trisuci. Vesak ceremony centered at three Buddhist temples by walking from Mendut to Pawon and ending at Borobudur.

On the eve of Vesak, especially during moments of peak full moon, Buddhists gathered around Borobudur. At that time, Borobudur is believed to be a gathering place for supernatural powers. According to the belief, at the time of Vesak, Buddha will appear in a look at the top of the mountain in the south.

Borobudur became one proof of the greatness and human intelligence ever made in Indonesia. Borobudur become the main cultural attractions in Indonesia besides Bali and Jakarta. After visiting Borobudur, you can also visit the surrounding villages like Karanganyar which has some interesting attractions.